Lady Louise Windsor was snapped today looking sombre as she joined other members of the royal family to attend a memorial church service in Balmoral.

Her Majesty died at the Scottish estate on Thursday, aged 96, with a Bucking Palace statement saying the monarch passed away ‘peacefully’.

Today, 18-year-old Louise, who has previously been described as Her Majesty’s ‘favourite’ grandchild and a ‘secret weapon’ for the Firm, was just one of royals making a public appearance in tribute to the monarch.

Three of the Queen’s four children – the Princess Royal, the Duke of York and Earl of Wessex – joined the Countess of Wessex, and Anne’s husband Vice Admiral Sir Tim Laurence, for a walkabout after attending a prayer service at Crathie Kirk.

Lady Louise Windsor (pictured here with her mother Sophie Wessex) joined other members of the royal family to attend a service at Crathie Kirk, Balmoral in Scotland, following the death of Queen Elizabeth 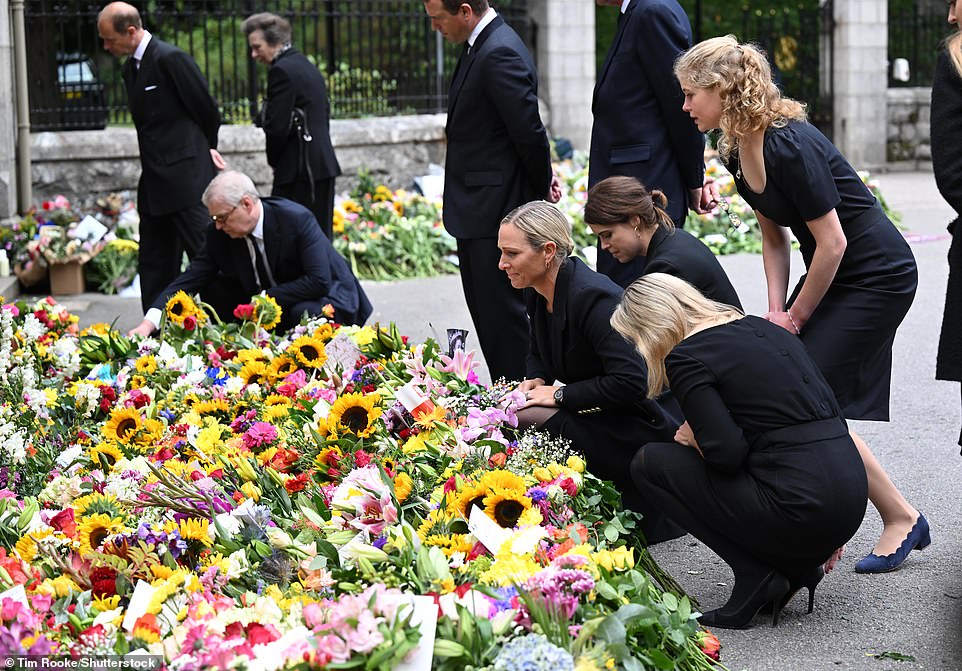 Lady Louise (far right) joined other members of the Firm to look at the flowers left for the Queen, and read tributes 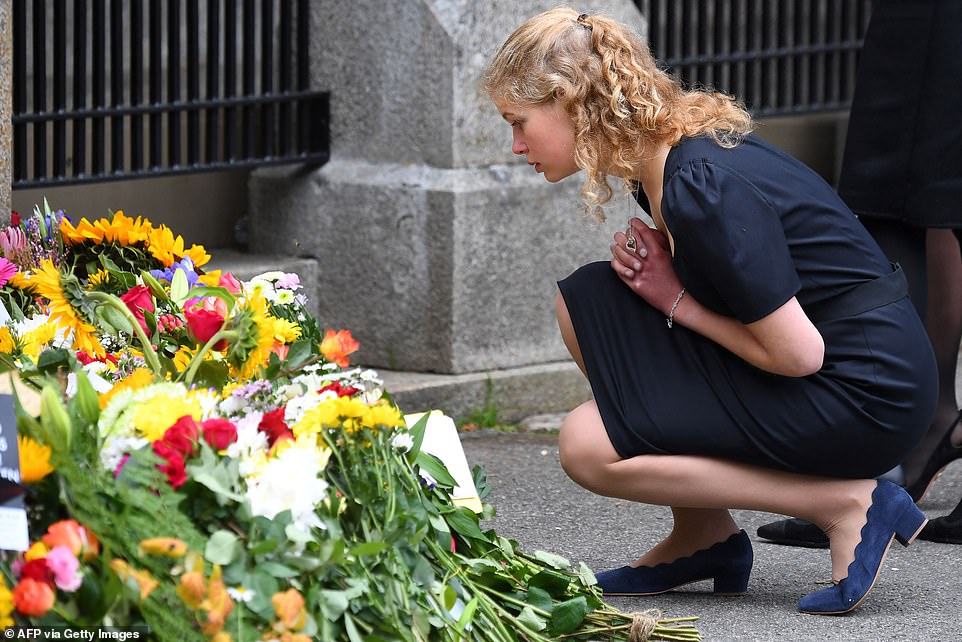 The 18-year-old (pictured) joined other members of the family in looking at flowers left for Her Majesty, and reading some of the written tributes 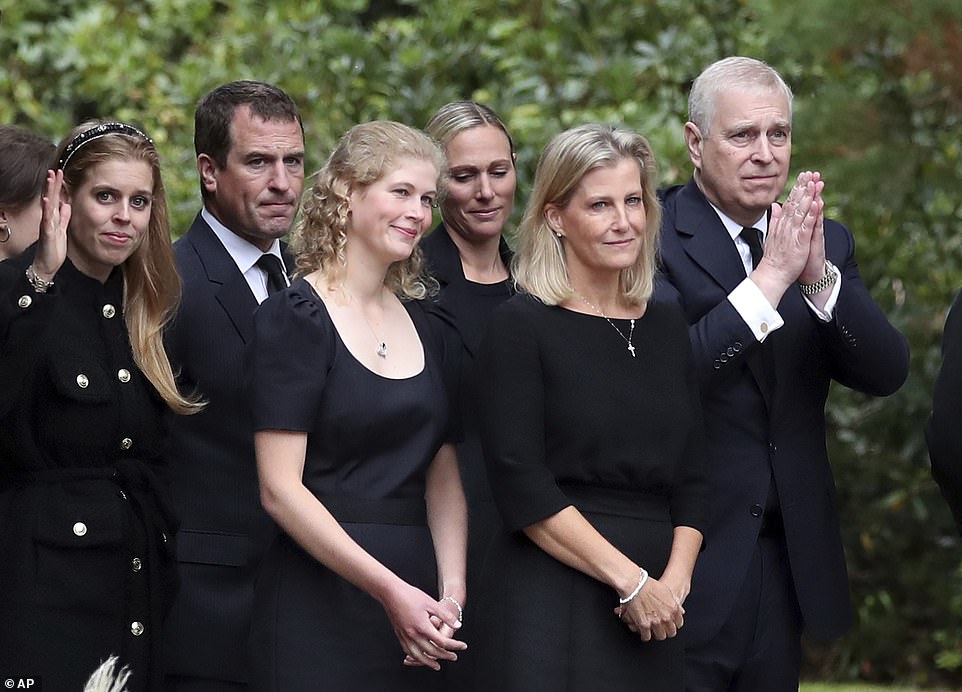 Senior members of the Firm smiled and waved at members of the public who had come to pay tribute to the Queen (L-R: Princess Beatrice, Peter Phillips, Lady Louise Windsor, Zara Tindall, Sophie Countess of Wessex and Prince Andrew)

Lady Louise, pictured here with her mother Sophie Wessex, is believed to have enjoyed a close bond with her grandmother, the Queen

The young royal, who was smartly dressed in a black frock, spent around 10 minutes reading the tributes and admiring the flowers with her family, before they returned inside Balmoral Castle.

The crowd of mourners at the Aberdeenshire estate broke out into a round of applause as senior members of the Royal Family waved to them.

Lady Louise’s father, the Earl of Wessex, accompanied by his wife who was holding hands with their daughter, thanked well-wishers lining the route back to Balmoral Castle. 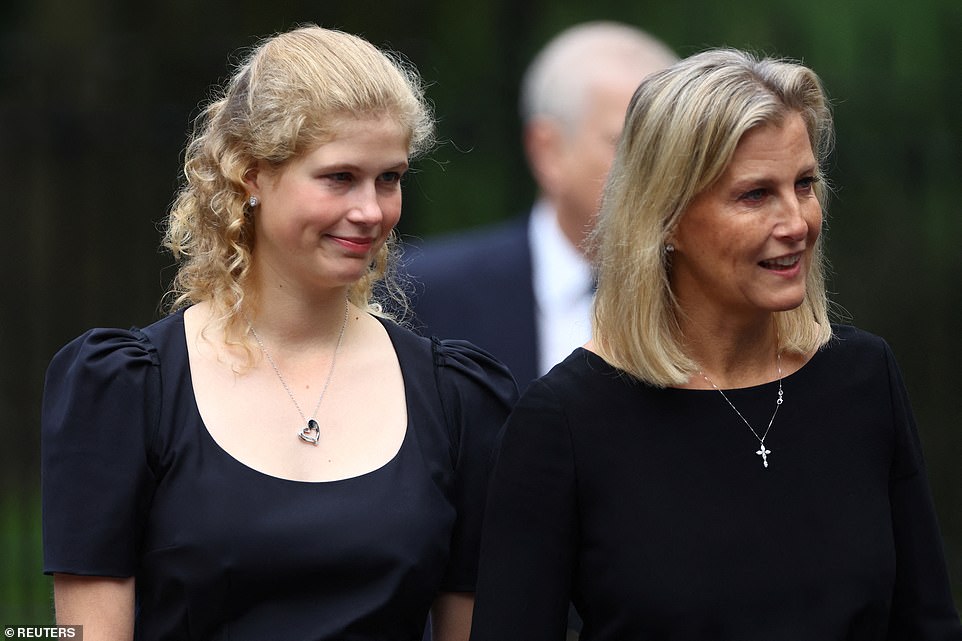 Today marked a sombre and sad occasion for the royals, with senior members of the family heading to Balmoral for a remembrance service (pictured L-R: Lady Louise Windsor and Sophie, Countess of Wessex) 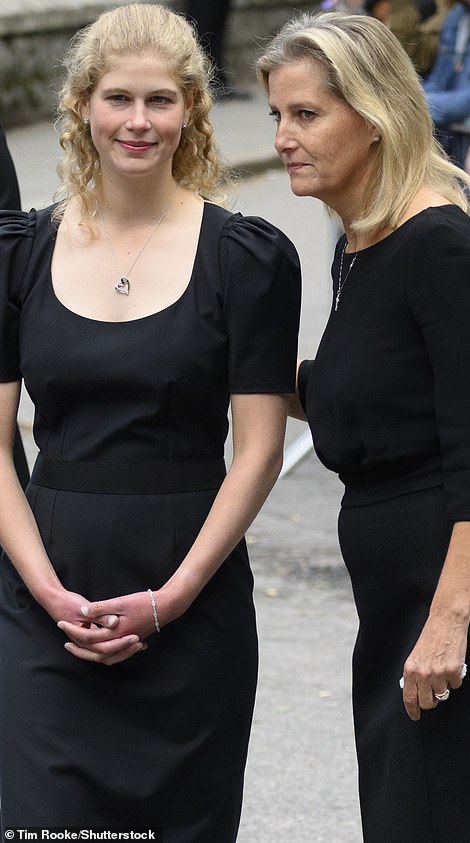 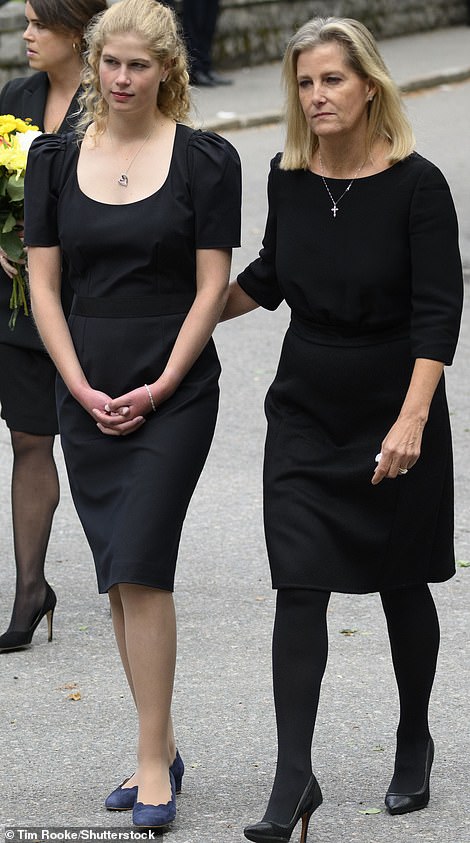 Supportive: Lady Louise (left) and her mother Sophie Wessex (right) seemed to offer each other support as they made the public appearance today 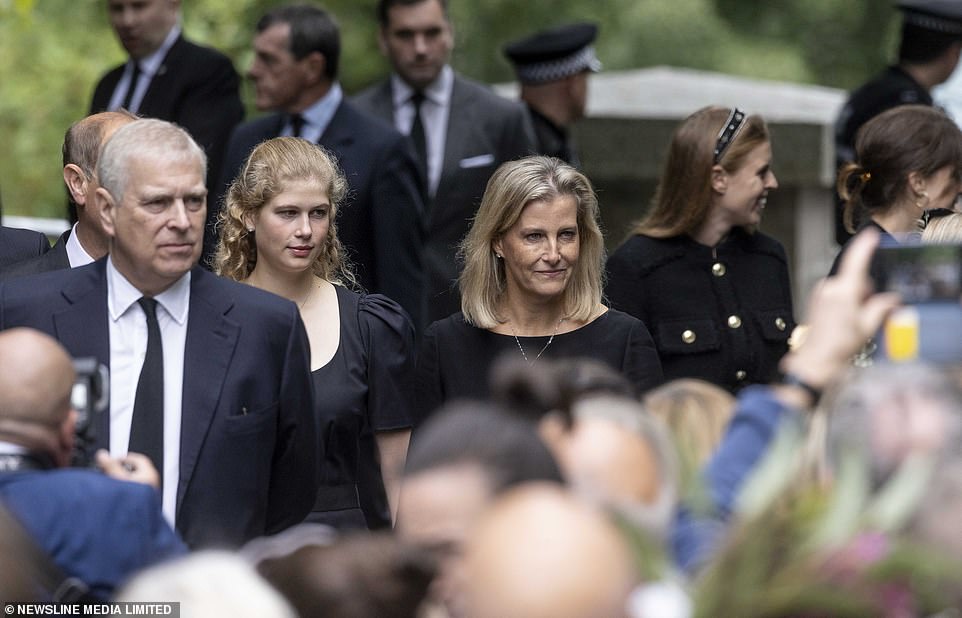 Although the day marked a sad occasion for the Queen’s family, at times the royals were seen smiling at members of the public, who’d turned out to show their support 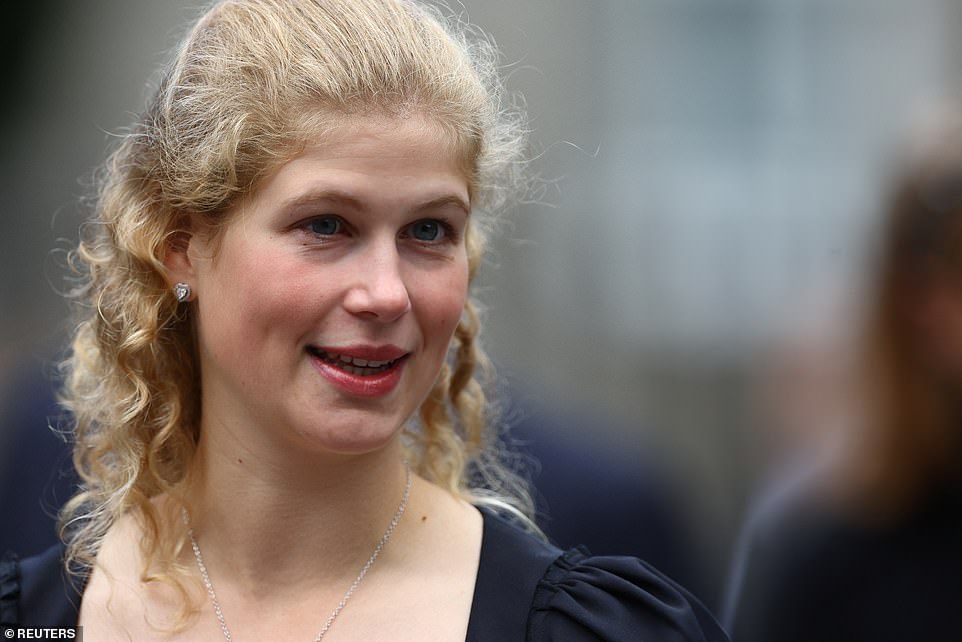 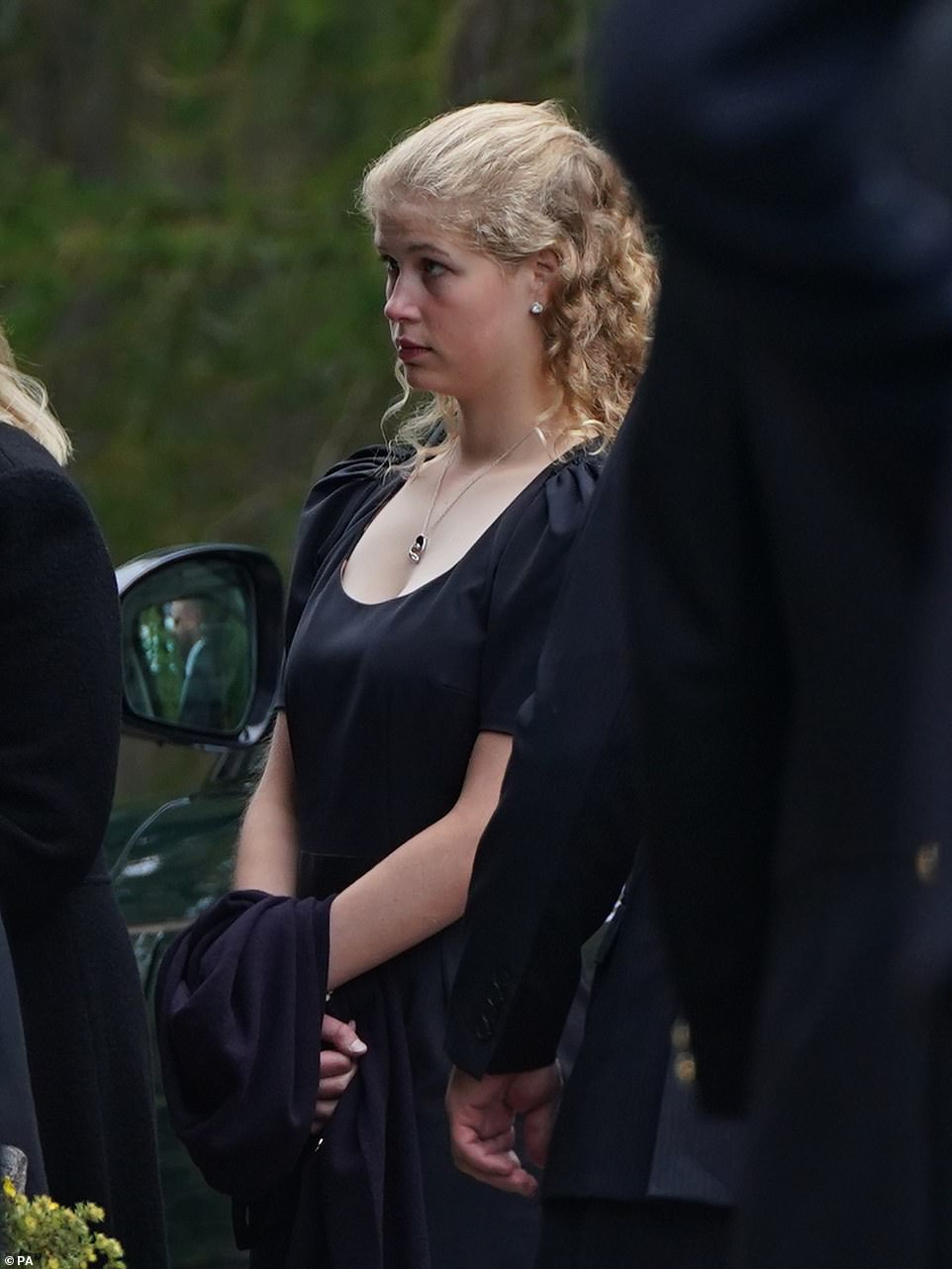 Lady Louise Windsor (pictured) joined other members of the royal family to attend a service at Crathie Kirk, Balmoral in Scotland, following the death of Queen Elizabeth 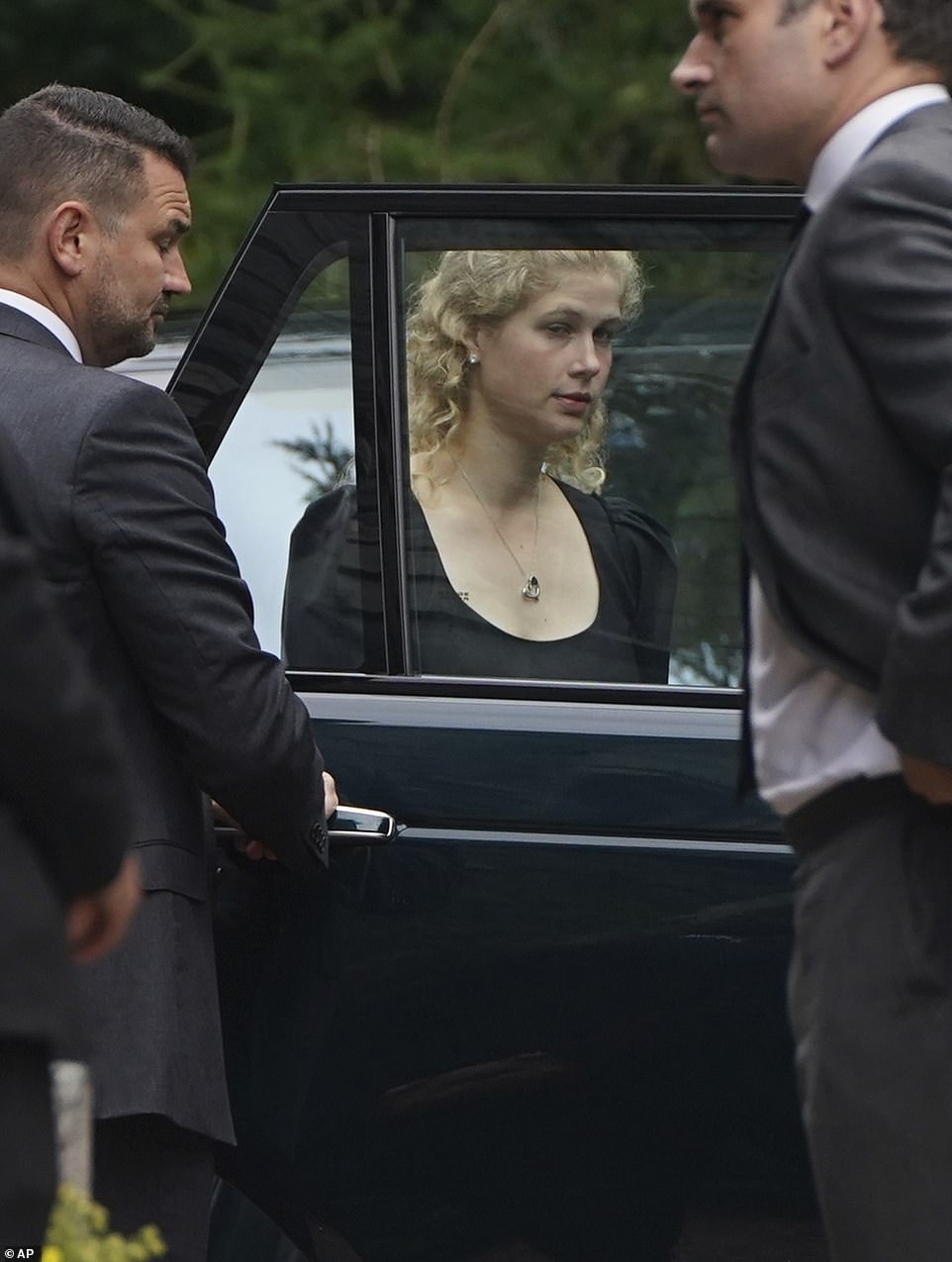 The 18-year-old, who has previously been described as the Queen’s favourite grandchild, looked sombre as she made the public appearance today 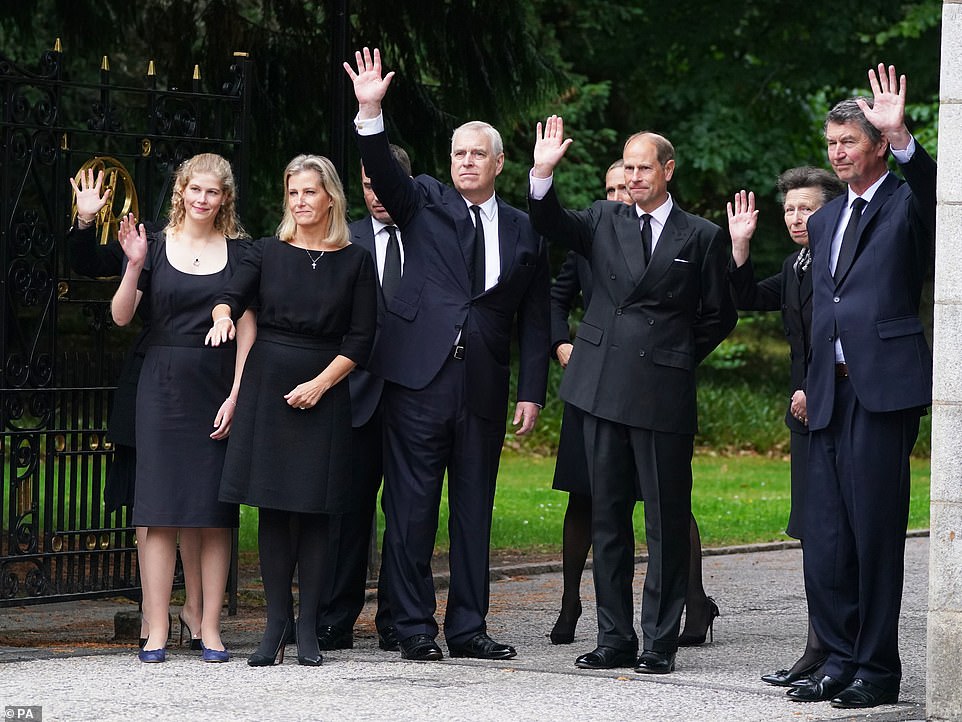 Waving: the family acknowledged the public as they attended a memorial church service in Balmoral (L-R: Lady Louise Windsor, the Countess of Wessex, Peter Phillips, the Duke of York, Zara Tindall, the Earl of Wessex, the Princess Royal and Vice Admiral Timothy Laurence)

Over the last two years, Lady Louise has taken on an increasingly public role as her parents Prince Edward and the Countess of Wessex have been bumped up the royal food chain following the disgrace of Prince Andrew and the departure of the Duke and Duchess of Sussex.

She was front and centre in the Platinum Jubilee celebrations, joined her parents at the Commonwealth Games and made her successful TV debut in a documentary about her beloved grandfather the Duke of Edinburgh.

Indeed she has become such a well-known face that she is recognised by customers of the garden centre where she has been working for £6.63 per hour since finishing her A-levels in June.

Now Lady Louise is preparing for her next chapter as a student after learning last month that she has the grades she needs to read English at the University of St Andrews, where her cousin Prince William famously met his future wife.

Unlike her older cousins, Princes William and Harry, Louise was able to see a lot more of her grandparents growing up because she has always lived just 11 miles from Windsor and had the benefit of being born around the time the Queen and Prince Philip scaled back their long-haul travel.

Prince Edward and the Countess of Wessex, wanted to give their daughter and son James, Viscount Severn, 14, a ‘normal’ childhood with schoolfriends and extra-curricular activities.

Lady Louise, who was born with esotropia, a condition that causes the eyes to turn inwards, which was corrected in a 2013 operation, was enrolled at St George’s School, Windsor Castle, before moving to St Mary’s School Ascot from year nine. 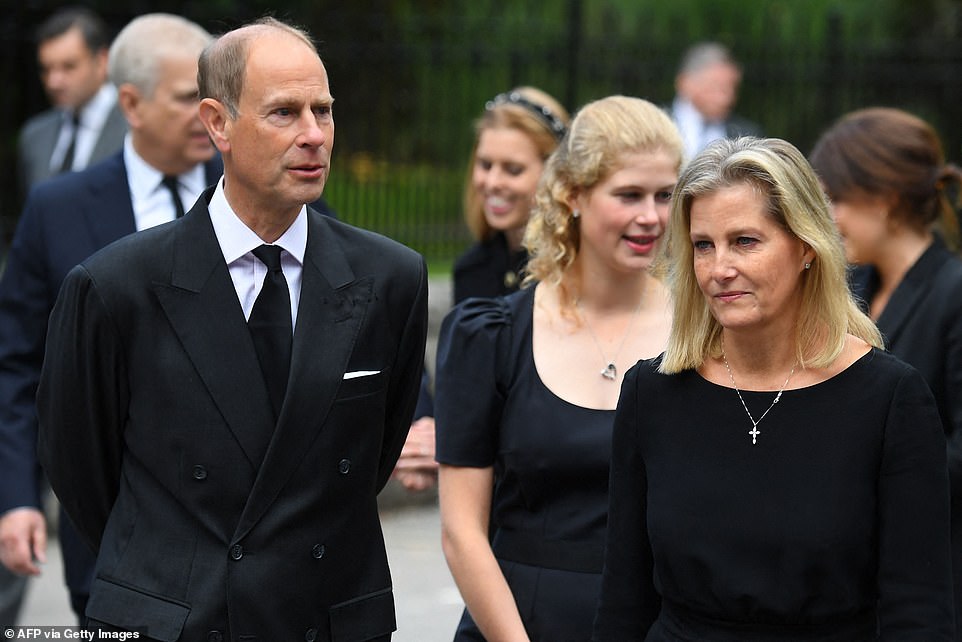 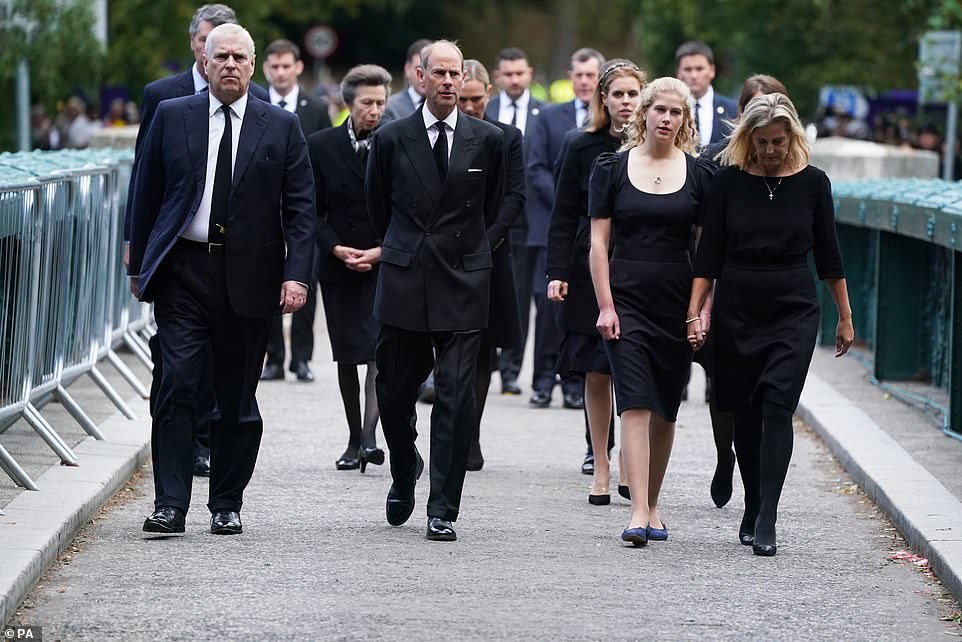 Sombre: the royals look downcast as they take part in a walkabout to thank members of the public for their support following the death of Her Majesty (L-R: the Duke of York, the Earl of Wessex, Lady Louise Windsor and the Countess of Wessex) 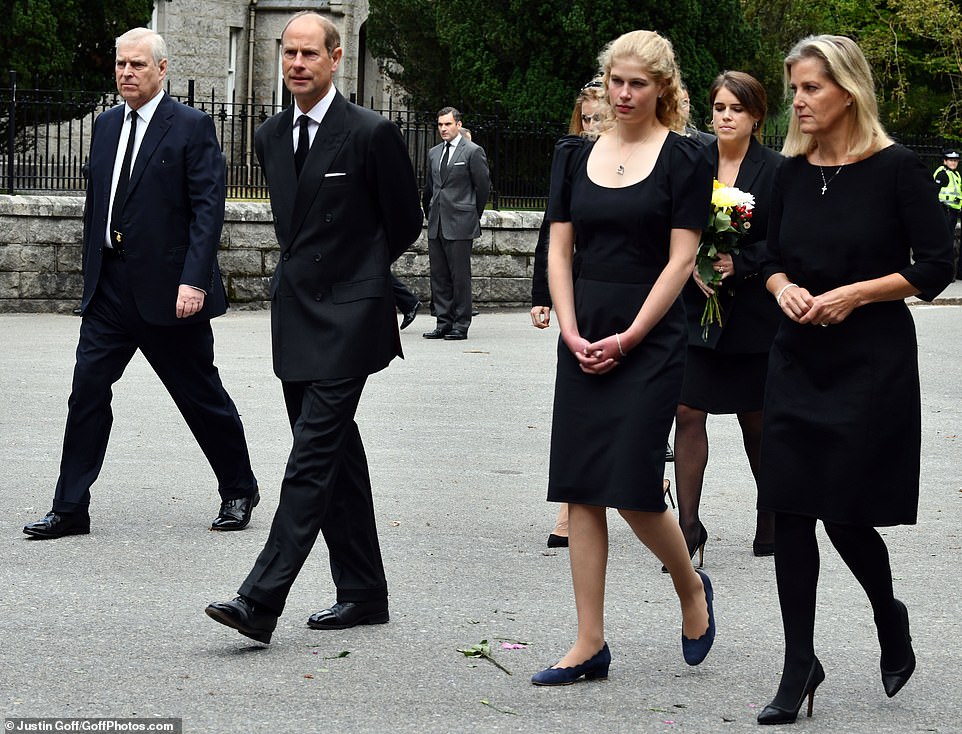 Lady Louise (pictured here with Prince Andrew, Prince Edward and Sophie, Countess of Wessex) has been described as a potential ‘weapon’ for the royal family 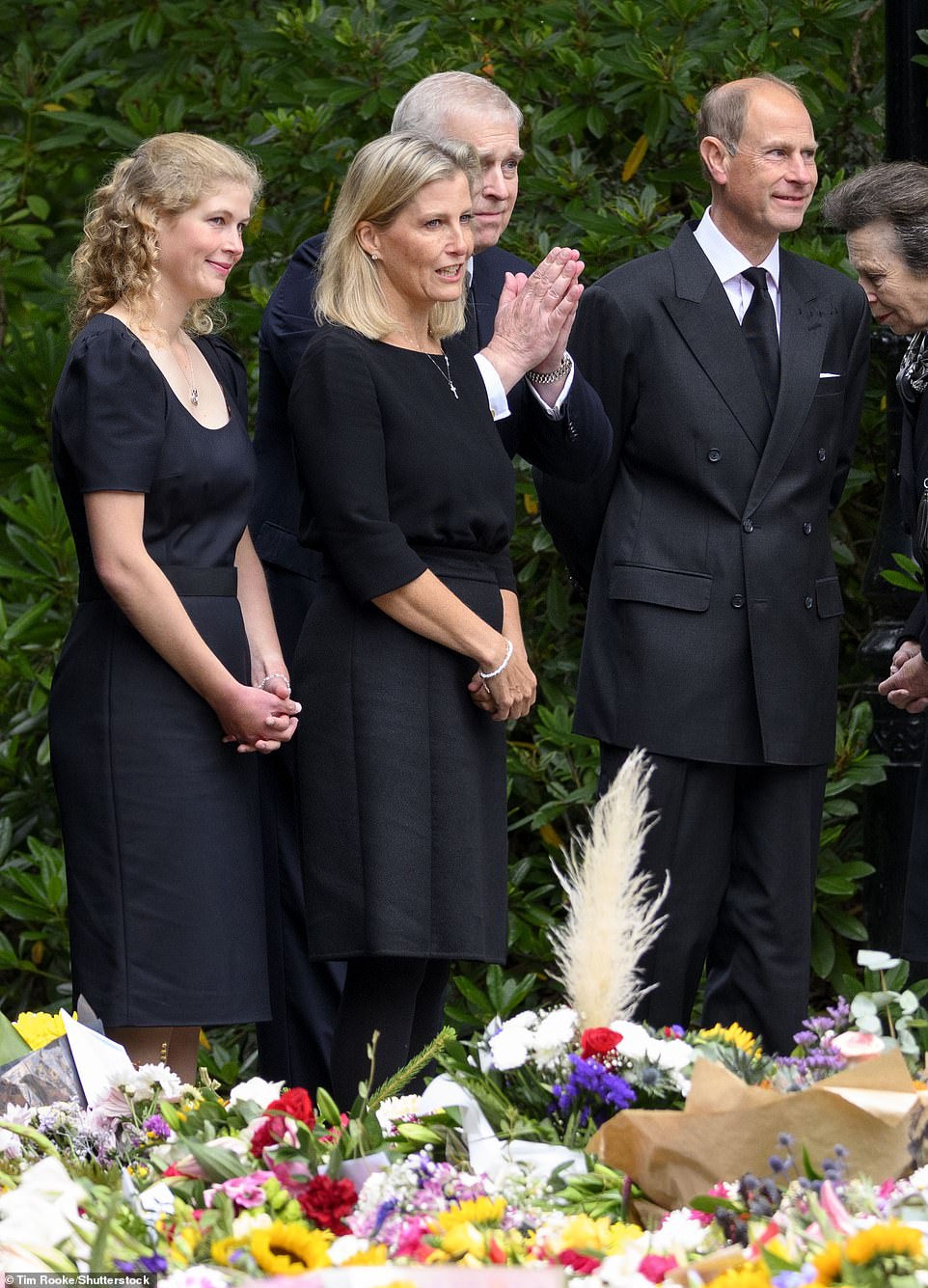 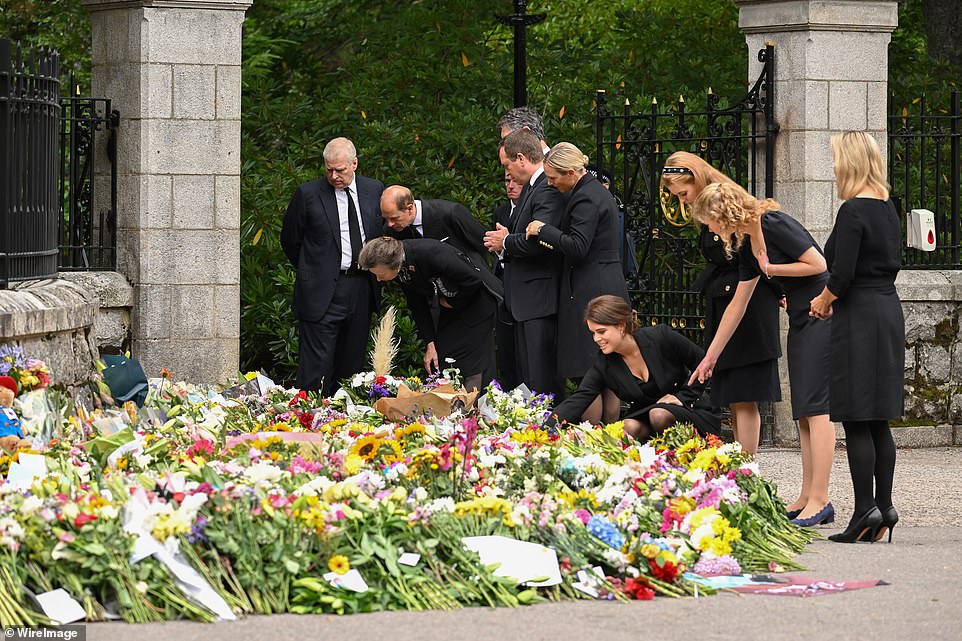 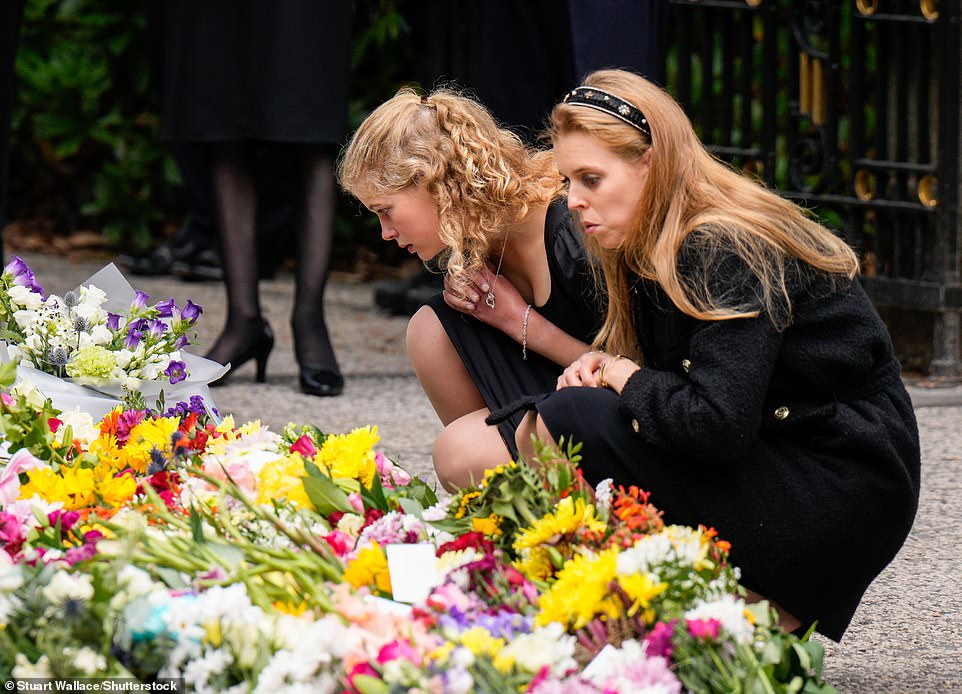 Tributes: members of the royal family, among the Lady Louise Windsor (left) and Princess Eugenie (right) spent some 10-minutes looking at flowers left by the public 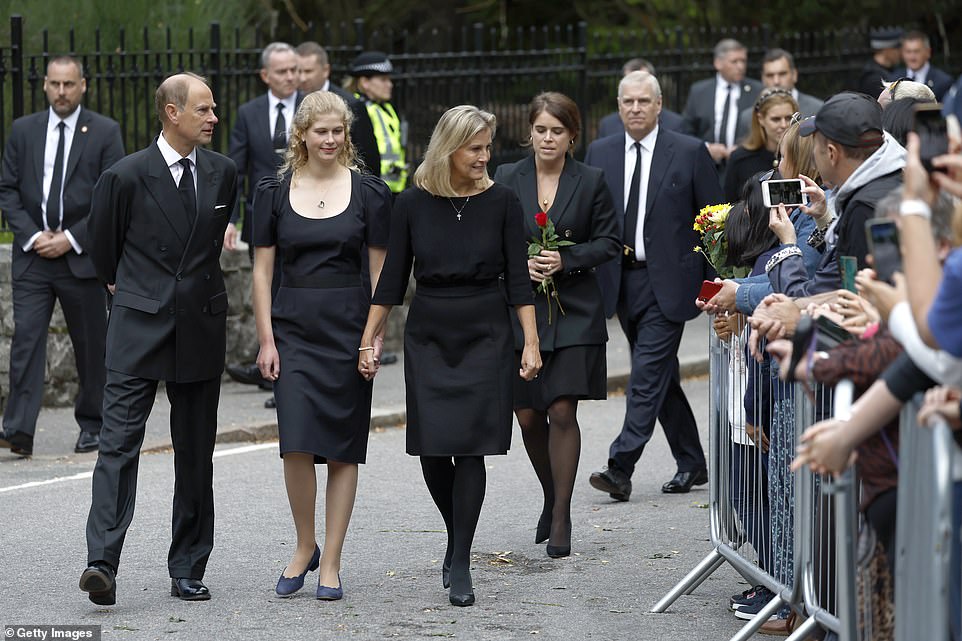 While Lady Louise has largely stayed out of the spotlight, some royal commentators have predicted she may have a greater role to play in the future

Largely kept out of the limelight, her first major Royal outing came at the age of nine when she was a bridesmaid at the Duke and Duchess of Cambridge’s wedding in 2011.

Many royal watchers noted her similarity to the Queen at the same age.

But it was through her grandfather the Duke of Edinburgh that she discovered her passion for carriage-driving.

Following his retirement, Philip had more time to enjoy carriage-driving, which was one of his favourite past-times since the 1970s. He raced carriages near Norfolk before going on to represent Britain at several world and European championships.

Sophie Wessex previously revealed that Prince Philip was ‘so pleased’ when his granddaughter wanted to take up the sport.

”My father-in-law was always so good at encouraging, he was really encouraging of Louise. So when she not only said “please can I have a go”, but then when she showed a flair for it, he was just brilliant with her,’ she said.

Phil Dampier, who has covered the Royals for nearly 40 years, told the Daily Telegraph before the death of the Queen: ‘[Lady Louise] seems to be very mature for her age and she’s shaping up to be precisely the kind of person the Queen can rely on in the future.

‘Could there be a role for her in a slimmed-down monarchy? The Queen and Philip had 1,500 patronages between them.

‘You have to ask yourself who is going to continue their legacy with Harry and Meghan and Prince Andrew off the scene? There’s a huge workload there.’

Who is left for us to root for on House Of The Dragon?